Home » Survival » Leatherman Surge Review: The Next Generation of Multi-Tool

Leatherman Surge Review: The Next Generation of Multi-Tool

Nativecompass is reader-supported. When you buy through links on our site, we may earn an affiliate commission. Learn more 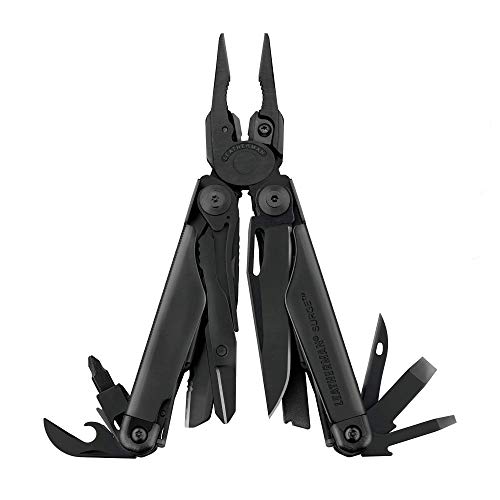 The Leatherman Surge is classified in the “heavy-duty” category of multitools, but does it deliver on duty or is it just another bulky, oversized utility tool? In this guide, we’ll explore the features of this multitool and all that it has to offer. Leatherman has been making quality products for years and you can guarantee that you’ll be satisfied when you choose their products. You have to make sure that you’re buying the tool that best suits your needs. That’s where we can help. Let’s take a deeper look at the Leatherman Surge.

The Leatherman Surge: An In-Depth Review

Upon holding the Surge, you’ll immediately notice several functions and tools right off the bat. The Leatherman Surge is a large, heavy-duty multi-tool that has a lot more heft than a lot of models on the market. It offers some great tools and functions, but it also weighs close to a pound, making it a much better choice for your glove box, tool kit, or survival pack than an everyday carrier.

For the sake of perspective, this tool is the same size as the Leatherman Signal, and just over half an inch longer than the popular Leatherman Wave multitool, giving you a comfortable size that you feel confident holding and using. While a lot of people focus on the size from a negative aspect, most users note that while the weight is significantly greater, it actually affords them more peace of mind. The heft gives you peace of mind that you’re using a sturdy, solid tool that won’t let you down even in the most extreme situations.

After all, when it comes to the durability of a multitool, the size and weight have a big impact. You’ll be hard-pressed to accomplish much with a featherweight, flimsy pocket knife. So, what are the specs? The Surge measures in at:

Typically, most will recommend nothing larger than 8-9 ounces for an everyday carry, so the Surge is a better choice for your vehicle, toolbox, or your belt when you’ve got the proper case. Aftermarket pocket clips aren’t effective– you’re likely to lose your pants if you’re not careful.

The main blade is nearly as long as a full-size pocket knife and even the scissors are larger than those on full-size Swiss army knives. The pliers are robust and feel comfortable even in larger hands. But with all of this bulk, do you really get the functions that you need? Let’s dig into the details and find out. 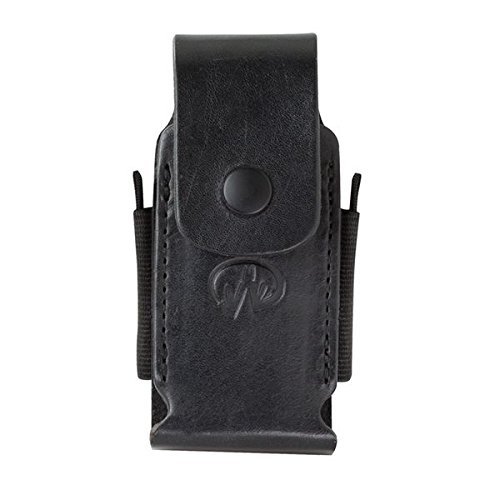 Although you could spend days exploring the details of all of the features of this multitool, some stand out more than others. For starters, the most important tools for most are full-sized. The Surge includes full-size versions of pliers, scissors, and two different knives—a straight blade and a serrated knife. The spring-loaded scissors and both knives are accessible while the tool is folded, and there’s an extra outside-accessible slot for a file or a saw.

The Surge includes both so that you can choose—or swap them out—as needed. Plus, the file includes a diamond-coated side and a metal/wood file, giving you a total of four versatile tools accessible right away, without even having to unfold the tool. That’s a pretty impressive start, even for Leatherman.

The Leatherman Surge ranks highly when it comes to construction quality. It’s exactly what you’d expect from a larger tool, offering premium materials, thicker steel, and durable, tight springs and pivots that will stand up to years of rugged use. The fact that it’s a larger tool also means that it is more ergonomic for average-to-large hands. Those who have smaller hands might find it strenuous to use the Surge in the closed position because of its size.

Open or closed, however, the Surge is strong and works seamlessly, providing the tool that you need for several different jobs. The construction is one of the best features of this model, in fact. Let’s look at each of the tools and what they offer.

The pliers are a critical item on any multitool. Pliers are already so versatile and it’s critical for a good tool to have a pair that lives up to the job. You’ll get the pointed tip for needle nose pliers, along with the standard flat section that gives you the grip of typical pliers, and there’s even a special area where you can grab onto stubborn nuts and bolts when you don’t have wrenches or sockets on hand.

Plus, the wire cutters are replaceable and offer two sections for cutting through wires of various thicknesses. This is great for anyone who has ever found themselves breaking their wire cutters only to find out that they’re not able to be changed out. On the Surge, you can simply buy a new set and install them, so it’s only a few dollars lost if any damage does occur. Of course, since the tool is made by Leatherman, that’s also a low risk in the first place.

There’s also a tool for stripping and crimping wires, giving you a total of seven different functions from the pliers alone. With 21 total tools, having a third of them found in a single part is quite a feat. We asked for comprehensive tools to go with the heft, and so far, the Surge has delivered.

On the Surge, there are several secondary tools available once you open the handles. You’ll find:

Some users are confused by the unnecessary proprietary bit driver, citing that the old tools worked just fine with the screwdriver features used, but Leatherman swears that this is a useful upgrade and a lot of people are finding ways to put it to use.

The final tool on this piece is simple, but often forgotten: a basic ruler that measures both inches and centimeters. How often are you out somewhere and find yourself needing to measure something? Eyeballing can sometimes do the job, but when you need an exact measurement, your Surge will be ready to assist. It wouldn’t be a true multitool if it didn’t give you something so basic and useful for everyday needs, after all.

Now that you’re familiar with the features of this tool, let’s talk about what the Surge can do in terms of its functions. Sure, it may offer 21 impressive tools, but are they actually functional and useful in all types of situations?

For starters, the knives are a definite win for the usability category. Nothing is better than having full-size tools accessible from the outside. Having the option between smooth and serrated blades is also a big plus. They’re durable and will cut through several types of materials without much effort at all. You can also sharpen them as they begin to wear and dull over time.

The pliers certainly afford plenty of usability, as we discussed above. So many of the functions of this multitool are found right here. They can be used for all kinds of jobs, from simple repairs to electrical work, and the wire cutters being replaceable definitely makes them an upgrade from any of the other options on the market right now.

People who are a fan of the outside accessibility will also appreciate that the pliers, knives, and scissors are all accessible without even opening the tool. The scissors are spring-loaded for easy use once they’re open, but will require two hands to access because of how they are packed into the tool. However, there are plenty of tools that you can access with a single hand, including the serrated blade and straight blade, depending on how you hold the tool and which hand you use.

The blade driver is a great addition, giving you the chance to choose your tool. As usual, it’s a little tight at the start, but a few swaps of the blades and it will loosen up so that you can swap blades with ease. Both the file and the saw offer great functionality and premium construction, as you would expect from Leatherman.

Perhaps one of the best features is the included bit driver. You might never use the extra flathead, but you’ll be able to swap the bits out to carry what you need and if you use the included sheath, there’s room for a row of bits that you can take with you so that you’re always prepared. It’s adding even more function to an already impressive tool, and it’s probably one of our favorite new additions to the lineup.

The bottle and can opener do their job. They don’t really have much to report, but they’ll work when you need them. The awl has a sharp point, which is great when you don’t want to risk damaging your knife tip. As you’ll see in the link above, the awl has a lot more uses than you might think, too. There’s a reason Leatherman includes it, and we approve.

What about carrying and protection? Some versions of the Surge include a premium leather sheath that can be carried horizontally or vertically on the belt. Leatherman also sells accessories for the Surge, including a standard pocket clip and a lanyard ring. However, you’ll want to tighten your belt if you’re clipping this tool on. As we mentioned earlier, it can get a bit hefty and you don’t want to accidentally drop trou in the middle of a hike!

What about Tool Clumping?

As with some multitools, users have reported that this unit cannot pull just a single tool using the included nail ledge. As a result, you get a “clump”, where all the tools come out at once. Still, this isn’t really a big deal and it’s easy enough to slide what you don’t need out of the way so that you can use the tool you want. The inside tools do lock into place for added security, and they all seem sturdy even for a tool of this weight.

Plus, over time and with use, the tools will loosen up a bit so that there is less clumping. A lot of people just use their hand to cover the tools they don’t need while using the ledge to pull the one that they do– it’s a common functionality issue of multitools, and it’s one that people have mostly adapted to, so it shouldn’t affect your decision too much.

As you’d expect from a brand like Leatherman, the Surge does deliver premium functionality and features. Sure, it’s a bit heavier than the average multitool, but you’ll never feel insecure about its ability to handle whatever job comes its way. It delivers powerful performance for use around the house, in the toolbox on the go, or even out on the trail if you want a sturdy, full-size tool that gets the job done.

Whether you like the premium outside accessibility or you are enamored by the bit driver addition like so many others, the Surge will certainly deliver everything that you need when you want a premium multitool.

Can Civilians Own Body Armor?

Do Female Deer Have Antlers

What Is Baby Deer Called

Outdoor adventurer and curious soul, I decided to create this Native Compass to talk about the great outdoors. Welcome!

All in your inbox.